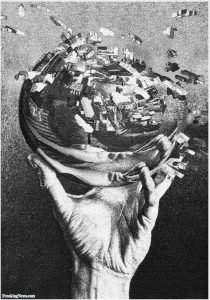 As Jaynes reconstructs history from surviving written records and artifacts, human contact with other groups was relatively rare during most of our species history. But our evolutionary success led to an increasing human population that, combined with some natural cataclysms, generated a sudden rise in inter-group contact. The people who only knew how to avoid or destroy other people killed each other off. The people who survived were those who adapted to a world of both self and other.

Here we are again, nearing the end of an exponential rise in population and facing explosions of mobility and contact. The old consciousness of cultural identity is strained to the breaking point – neglected by those who claim identity in such specificity that it is nothing more than individualism and attacked by those who claim identity that is only defined by hatred of others. The center cannot hold.

The new paradigm of quantum/constructivism allows us to generate a “next level” of consciousness, one that doesn’t just identify us and them but that also gives us the responsibility for doing so. There is no natural boundary among human beings – there is only the choice to distinguish ourselves from others in whatever ways that serve our mutual interests. Those interests minimally include not directly destroying each other, but now it is obvious that they also include sustaining the planet and building a commonweal for all its creatures.