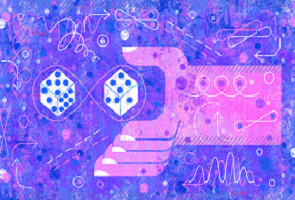 When we think of building a more equitable and inclusive future, the task may seem overwhelming, especially in the shadow of reactionary political events. The stark options seem to be either acquiescing to institutions that perpetuate the past or making some kind wrenching transformation to build a new future. But maybe there’s another way to think about change.

Carlo Rovelli, the immensely and deservedly popular explainer of quantum physics, writes that time does not exist except in our human perception of it — the past is not something that has already happened and the future is not something that has yet to happen. Rather, both the past and the future are clouds of probability; the difference between them is that we have already related to the probability of the past in particular ways, while we have yet to relate to the possibilities of the future. In the fleeting transition of present, we should not think that we are moving into some particular unknown future, but rather that we are facing an oncoming cloud of possible futures. As those possibilities envelop us, we must choose this or that, this or that. And the sum of those choices immediately becomes the actual past.

Ever since I read that seemingly minor change of agency, I have been struck with its implications for approaching change. If the future does not exist until we interact with its possibilities, then every possible future is a potential outcome of that interaction. The difficulty of change is not the intransigence of reality, but our own calcified perception of it. The question is not, what can we change, but what conditions do we continue to accept. In other words, the future is not by default a continuation of the past. It must be recreated every instant.

What about power and privilege? Don’t people of a dominant group have, by definition, more influence over the future, and therefore, more responsibility? Certainly, people who benefit from current conditions have a strong motivation to perceive those conditions as natural reality – think of proponents of social Darwinism and practitioners of religious or political hegemony. But their view of their own centrality to reality is simply another exercise in ethnocentrism. The only unique thing about a dominant group’s ethnocentrism is that people tend to emulate that perception – perhaps because they aspire to membership in the dominant group, perhaps because they fear it, and maybe just because they consume a lot of media constructed by that group. In any case, the conditions of dominance are accepted and the reality is recreated.

Our every perception, conscious or not, of “how things are” is a constructor of reality. If we reject that assumption in the name of a greater natural or supernatural power, we continually bring that power into existence and reduce our own influence. If we accept the past as the default condition for the future, we make that more likely. Alternatively, we can give ourselves a vote in how the future will turn out by simply being aware that it is what we are doing. None of us will unilaterally create a new future, but individually we can refuse to continue participating in the past. At least that gives the future a chance.

Developmental intercultural training at its best should be an empowerment of our future-building capacity. By enabling the development of more complex perception of otherness, intercultural educators can equip people with the ability to recognize and call out ethnocentrism, from the obvious forms of racism and sexism to the more subtle, but arguably more dangerous, forms of entitlement. Intercultural training in general allows learners to substitute the disempowering ideas of inferiority or exotic foreignness with the perception of others as both equally and uniquely human, but development training extends intercultural sensitivity beyond communicative competence and integrates it into the construction of multicultural citizenship. If the future is indeed being realized in our perception of it, then the development of ethnorelative perception is the key element in creating a more equitable and inclusive one.